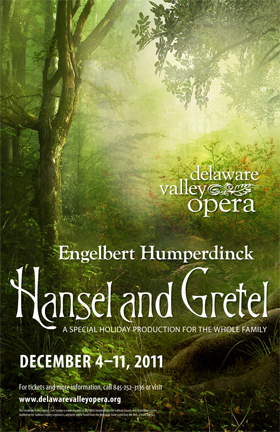 Mezzo-soprano Kimberly Feltkamp (Hansel) was a member of Delaware Valley Opera’s Professional Artist Development Program, and sang Madame Larina in last season's production of Eugene Onegin. She recently received her Bachelor’s degree in Vocal Performance from Hofstra University, and was part of Opera Manhattan’s Studio Ensemble Program and the Hofstra Opera Theater, where she appeared most recently as Prince Orlofsky and Donna Elvira. return to top

Marka Knight (Witch) has perfomed in opera houses in New York, San Francisco, and New Zealand. Her roles include Prince Orlovsky in Die Fledermaus, Mrs. Nolan in The Medium, Arnalta in The Coronation of Poppea, the Drummer in The Emperor of Atlantis, and Auntie in The Hot Iron, as well as the roles of Julius Caesar, Orfeo, Dido, Aeneas, Carmen, and Pericles. An art song enthusiast, Ms. Knight’s concert work includes performances of Frauenliebe und Leben, Winterreise, and Songs of a Wayfarer. She was a past winner of the Sarah Lawrence Concerto Competition, the Bay Area NATS Art Song Competition, and the Bay Area Mu Phi Epsilon Competition. return to top

James Rensink (conductor/pianist) is a world-renowned musician who has performed at Lincoln Center as leading baritone, pianist, composer, and conductor. Artist-in-Residence at The Storm King School, in 2001 Mr. Rensink received a special citation from the Congress of the United States for his outstanding achievements. In recent seasons, he appeared with members of the Vienna Philharmonic in the Mozart Requiem, with the OCMEA Wind Ensemble of New York, and as soloist in Rhapsody in Blue. His arrangements premiered in Vienna as part of the Pitten Classics Festival, and he sang Scarpia in Tosca. Having sung more than seventy leading operatic roles in twenty-five countries, he is a favorite of conductors and audiences, and his performing career has taken him to many leading cultural venues, including Carnegie Hall, the Kennedy Center, and Lincoln Center, and internationally to stages in Tel Aviv, Jerusalem, Vienna, Tokyo, Shanghai, and Manila. return to top

Soprano Erin Watt (Gretel) completed her Master of Music degree in Vocal Performance at North Park University in Chicago. Erin moved to New York City in 2010 to pursue her love of opera, film, and education. Back in Chicago, she performed such roles as Little Red Riding Hood in Into The Woods, Lucy Lockit in The Beggar’s Opera, as well as several short films and TV commercials. Recenlty Erin performed as Barbarina in Amore Opera’s production of Marriage of Figaro in New York. Currently, Erin teaches voice and piano to students ages 6 to 60, and studies voice with Carol Castel. return to top