This production is dedicated to the memory of Virginia Cates Johnson, loving mother of our General Manager, Carol Castel.
There will be No intermission. Please be sure to turn off or silence all cellular devices for the duration of the performance.

Act One: The story begins with Mr. Green (the impresario) looking for a cast for a new opera “Paradise Abroad”. He is auditioning to find the perfect soprano to sing the lead role. The company’s long-time diva, Stella Abratza, however believes she is entitled and perfect for the part. Mr. Green, however is looking for fresh new young voices.

As the auditions take place a series of operatic characters line-up to be heard, among them a surprise singer that takes Green’s breath away. The climax comes when the rising young star, Canta Nuova and the reigning diva, Stella Abratza compete vocally -- at the same time! Mr. Green is left to come up with a solution for the trouble they have caused --- which he does, finishing with a moral that leaves them shocked and, for once, speechless.

This view into the backstage workings of an opera company is as poignant and current today as it was in Mozart’s time proving that the opera business like human nature doesn’t change.

The career of DVO General Manager and Artistic Director Carol Castel has taken her through the theater world from musical theater to opera; from actress and singer to singing actress; from arts administrator to opera stage director. Her directing career has included over 60 opera productions in the U.S., Canada, and Europe. In addition to a studio of private voice students, Ms. Castel coaches and teaches classes in acting, artistry, and performance practices for the classical singer. She is on the faculty of OperaNUOVA in Edmonton, Canada, and is the founder and General Manager of the New York Opera Studio.

Mezzo Soprano Carol Hoehn Diefenbach (Judy) has performed professionally since 1973 when she graduated with a B.A. in Theatre Arts from Webster University, St. Louis, Mo. She proceeded to train at the Manhattan Sch. of Music and Alvin Alley dance studio. Her venues have included Broadway, off-B’way, Regional, Operatic and Concert Stages throughout the United States, which include over 43 principal roles. Ms. Diefenbach has been personally honored by Who’s Who in American Women, National Museum of Women in the Arts and the Association of American University Women. Carol teaches voice in affiliation with the Vocal Arts Foundation, NYC and is a founding member of the Delaware Valley Opera.

An emerging young soprano, Alexanndra Haines (Canto Nuova) is a recent graduate of Ithaca College’s School of Music. Alexandra particularly loves singing, teaching, studying anatomy, and being a bit mischievous.. She recently sang the role of the First Spirit in Mozart’s The Magic Flute, and has performed with the DVO since 2009, appearing in Lehar’s The Merry Widow, Puccini’s La bohème, Tchaikovsky’s Eugene Onegin and Nicolai’s Merry Wives of Windsor. Earlier this serason she performed as Susanna in Mostly Figaro with students of the DVO and NYOS Summer Opera Advantage Program.

George Hemcher (pianist/George), a native of Frazer, PA has worked closely with Nico Castel and Carol Castel at Delaware Valley Opera (DVO) and New York Opera Studio. This past summer at DVO, George was a répétiteur for Verdi’s Otello, conducted Kiss Me, Kate by Cole Porter, and sang the role of Spärlich in Nicolai’s Die Lustigen Weiber von Windsor. Mr. Hemcher has also been active in writing two piano transcriptions of operas for Thomas Muraco’s Opera Repertory Ensemble for performances at Manhattan School of Music. In 2012, George wrote transcriptions for Donizetti’s Lucia di Lammermoor, and this past season worked on Gounod’s Faust. Mr. Hemcher holds an undergraduate degree in Music Merchandising from Hofstra University, and a Masters in Music Piano Accompanying degree at Manhattan School of Music.

An accomplished baritone, Wayne Line (Stage Director) has sung in China, Bulgaria, The Czech Republic, Germany, Austria, the United States and Canada. He performed with the DVO in 2011 as the Father in Hansel and Gretel and in last season’s production of Merry Wives of Windsor as Falstaff. This season he will again lend his beautiful baritone voice and rare acting ability to the DVO as Germont in Verdi’s La Traviata in October. But in addition he brings his vast knowledge and experience of opera and stage to his DVO debut as stage director for a very creative and special rendition of Mozart’s The Impresario.

Soprano Brooke Schooley (Stella Abratza) has been noted for “her florid runs and wonderful acting” as well as her “marvelous, soaring voice.” She recently appeared in concert with Light Opera New York, and is looking forward to debuting the role of Blonde (Die Entführung aus dem Serail ) in 2013 with Delaware Valley Opera. In August 2012, she sang the Queen of the Night (Die Zauberflöte) with Hubbard Hall Opera Theatre and was hailed as “the ringer of the evening” with her “fierce acting intensity” that “dominated the stage.” Brooke has recently sung Adina (L’Elisir d’Amore) and Gretel (Hansel and Gretel) with Delaware Valley Opera. She has also performed La Fée (Cendrillon), The Queen of the Night (Die Zauberflöte), Madame Herz (Der Schauspieldirektor) and Frasquita (Carmen) with New York Lyric Opera, as well as Susanna (The Marriage of Figaro) and Mabel (The Pirates of Penzance) with The Light Opera Company of Salisbury. In 2010, Brooke premiered the role of Miss L’Amour with Empire Opera in Waundell Saavedra’s The Great Supper. Brooke has also sung with Bronx Opera, Pacific Opera, and New York Opera Studio, and she studies roles with The Martina Arroyo Foundation. Her role preparations with Ms. Arroyo have included: Adele (Die Fledermaus); Blonde; Marie (La Fille du Régiment); Oscar (Un Ballo in Maschera); Gretel; Madame Herz; and Zerbinetta (Ariadne auf Naxos). Brooke studies voice with Carol Castel.

Soprano Emilie Storrs has performed the leading soprano roles in a wide range of operas from Mozart to Verdi and from Tchaikovsky to Britten throughout the United States, as well as in England, Italy, Greece and Bulgaria. A native of Lockport, NY, Ms. Storrs is equally at home on the concert stage. She has performed with the Buffalo Philharmonic and is a frequent recitalist. Ms. Storrs was last seen with the Delaware Valley Opera as the Witch in Hansel and Gretel. 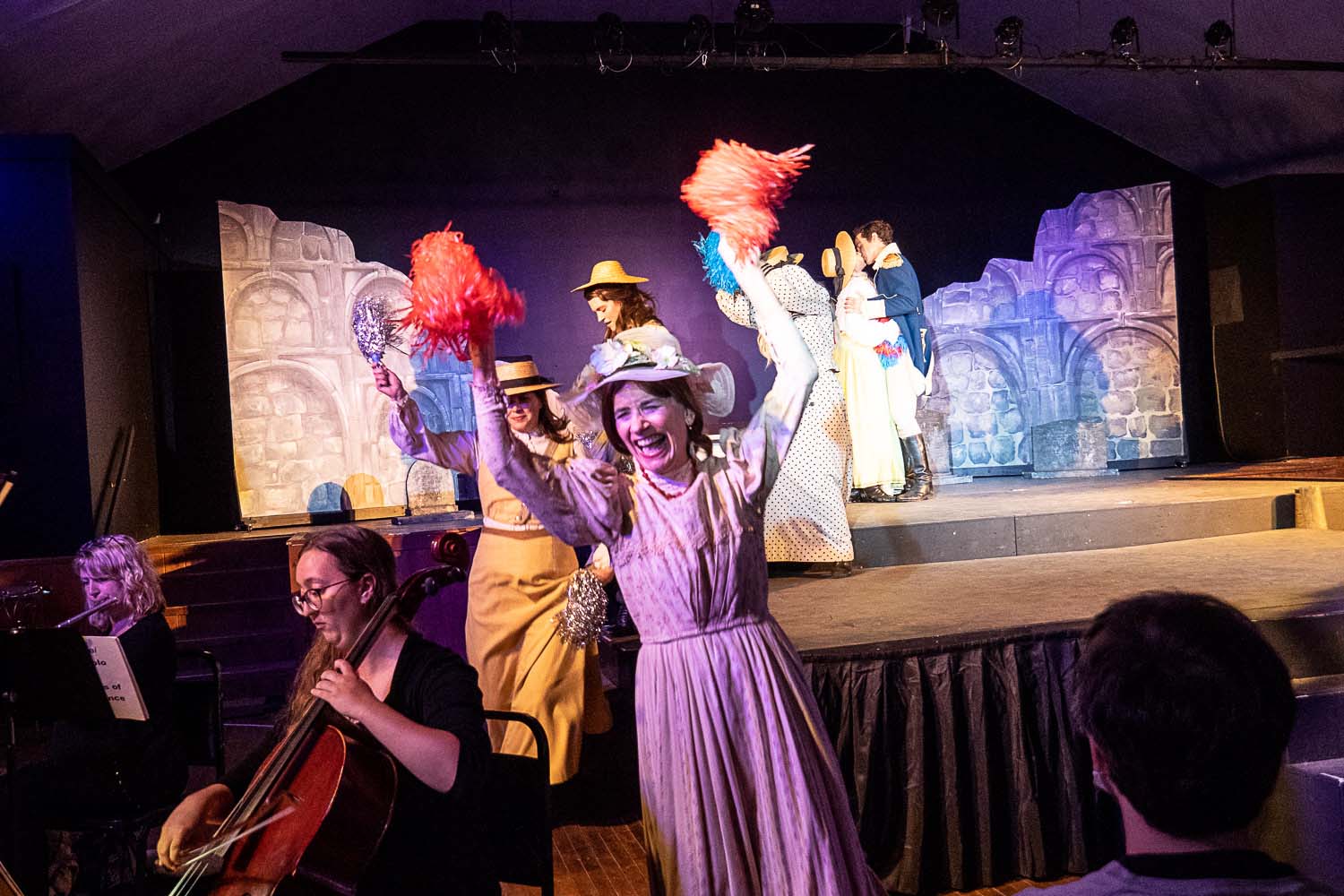